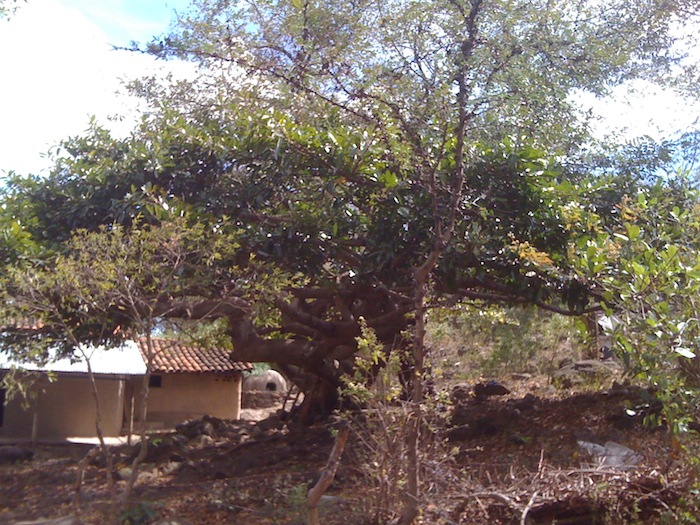 Thursday marked the first day the bio-sand water filters were installed at Las Lomas del Nance.  The local water committee had decided the first filters should go to those who lived in an area not easily accessible by truck, so we drove the filters, sand, and crushed rock as far as we could, then prepared to move the filters any remaining distance by other means.  The concrete filters each weigh approximately 210 pounds before any sand or gravel is added. 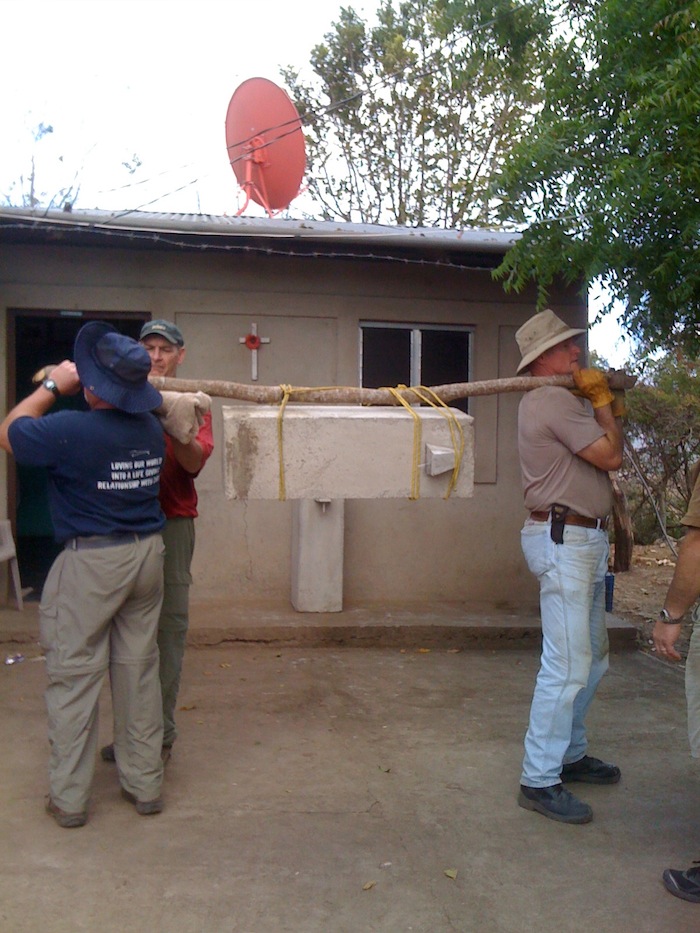 Before today, we had not seen the actual terrain over which we were to traverse – all we knew from Dan (who had not seen the terrain, either) was that it was ‘like the scene from ‘The Man From Snowy River’’ (where the lead character rides his horse over the edge of a blind cliff where no other riders can follow).  So…  constructing a crude gurney from rough lumber and tie straps, over the edge we ‘rode’, not knowing exactly what we would find.

We quickly learned that it was not the grade that prevented us from using the truck, but narrow trails leading to a cross between a river bed, lava field, and lunar landing.  The rock-strewn path was very treacherous, and required careful navigation even when walking unloaded, but was made all the more difficult when trying to carry our sacks filled with rocks, gravel, and washed sand. 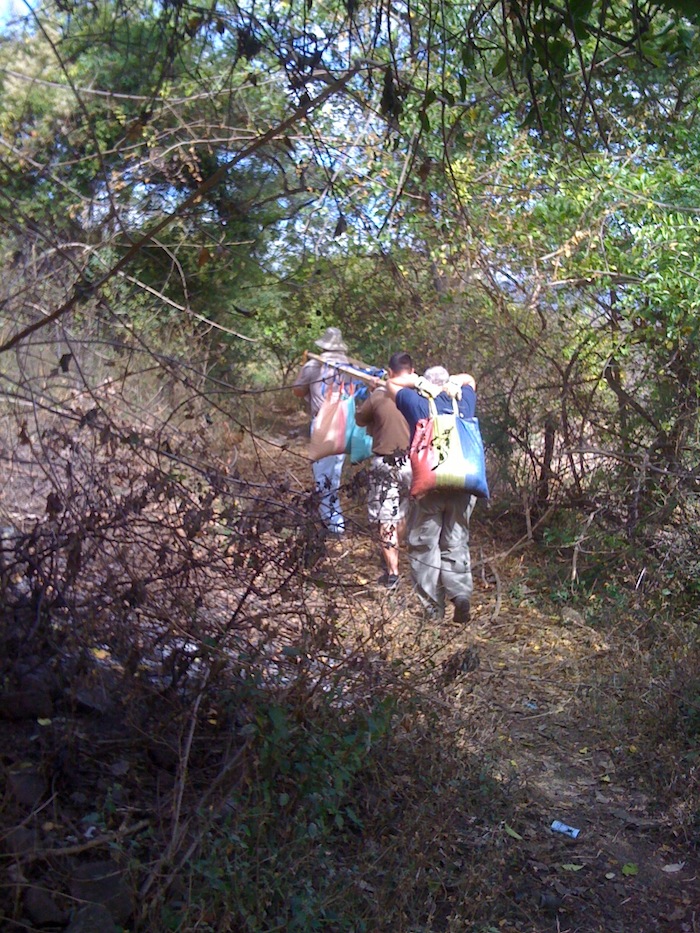 After distributing the sand to four of the five houses along the trail, we then set about the task of trying to carry the concrete filters.  Freddie, one of the local men of Las Lomas, took a green tree limb and lashed the filter to the limb with rope.  He and one of the young men then took that filter the entire distance to his house (0.78 miles). 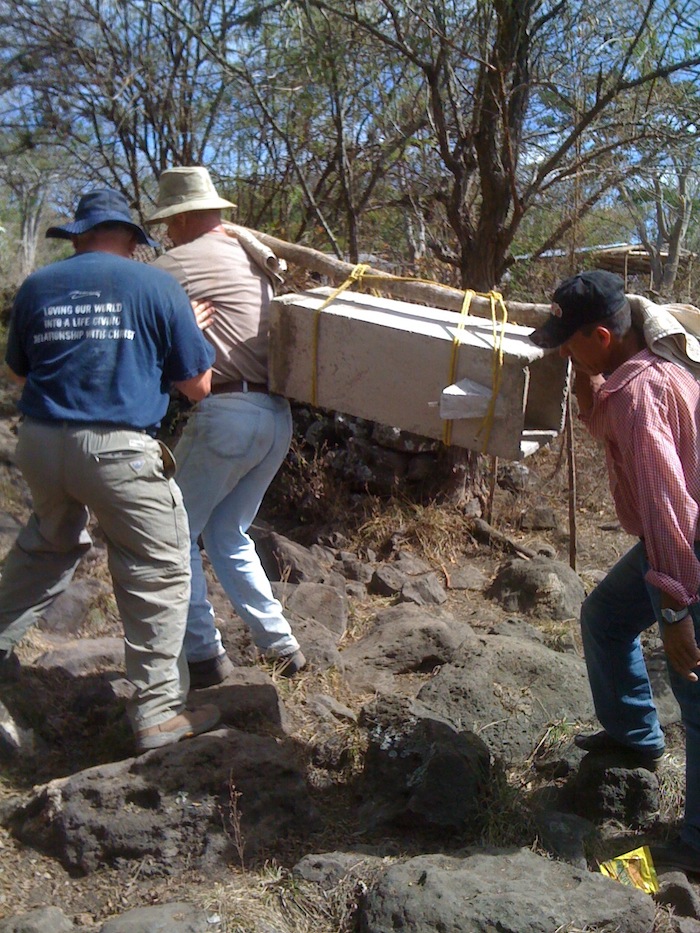 Our initial efforts were not as effective, and we quickly tried one method after another before finally abandoning our designs and resorting to the same design.  Luckily, we didn’t have as far to go since Freddie’s house was the most-removed of the rock-trail houses. 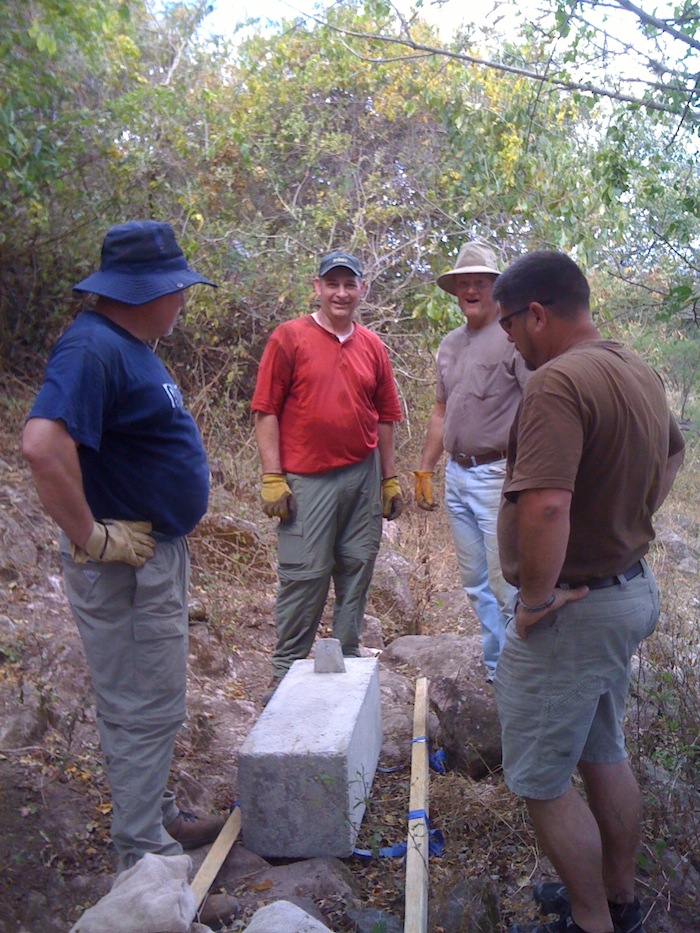 After lunch, we made one more trip down the hill to carry the third filter.  This one seemed a little easier, but that may have been because Freddie loaned us his limb/pole to replace our dimensioned lumber.  While we were at the bottom, we went ahead and began the set-up of the filter in Freddie’s kitchen.  First the large gravel, then the smaller gravel, then the water and sand.  Since this was our first set-up, it took a bit longer to fine-tune, but it was working well by the time we left. 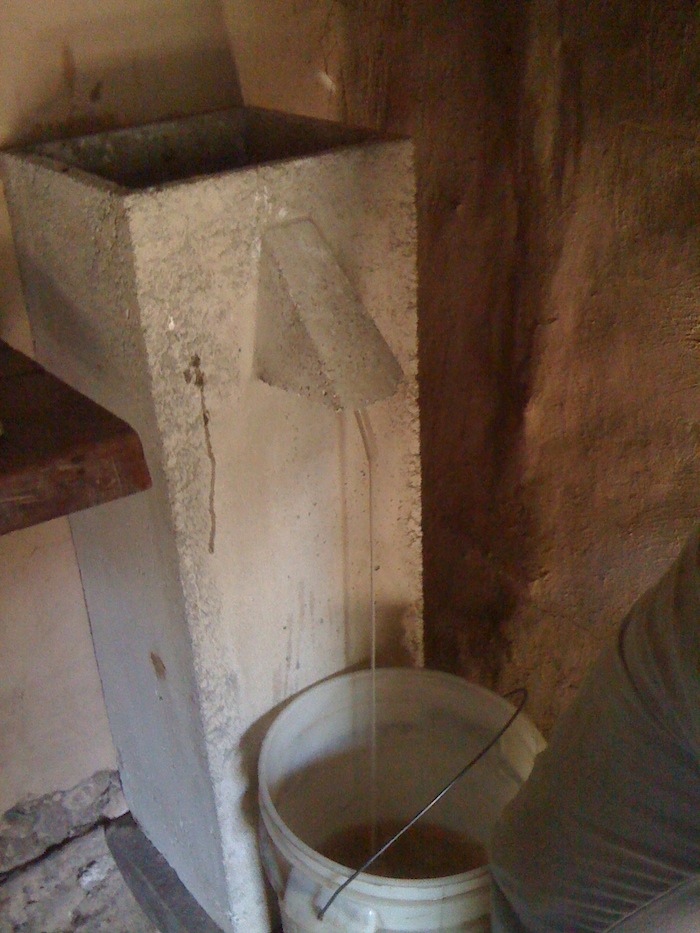 Given the unexpected roughness of the terrain, and our ‘discovery’ phases trying to find the best method to do almost everything, it took a bit longer to accomplish all our ‘firsts’ today…   but we now have almost all of the heavy portage done and feel confident that we can quickly knock out the remaining ‘down-the-mountain’ units tomorrow morning.  We’ll also have more people making the trip out to Las Lomas tomorrow, and we’ll try to get an additional four units installed in other houses within the community.  It was an extremely strenuous day today – but now that we have hot meals (thanks, Marta!), hot showers, and Gatorade and bananas back in our systems (thanks, Richard!), we feel ready to tackle the day ahead tomorrow! 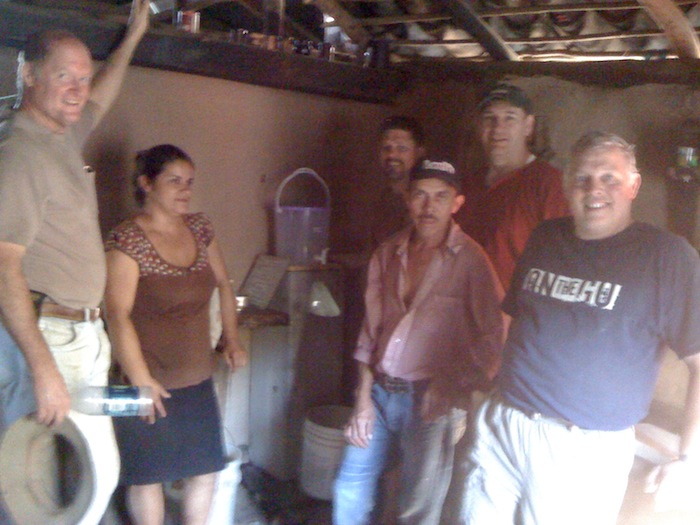